To the Belgian-born English art dealer Ernest Gambart (1814-1902): "On my way thro' to London I will not fail to stop for a couple of days in Paris to give a final look at the plate of 'the Finding of the Saviour on the Temple'. I shall not however expect to find further points for Mr Blanchard's reconsideration: he had already so thoroughly attended to my previous suggestions and had so little further to do when I returned him the last proof that now there cannot well be more to add to the plate [...] The praise due to you as the publisher I feel to be more singular for it is by the fact that you have been ruled by an artistic interest in your task that the engraver has had the proper opportunity for completing his work so perfectly; had you allowed the business interest to be paramount you would have considered only how you could most quickly turn your capital invested in the work, and have discovered the best means of producing a black effective engraving in the shortest possible time: that you have not done this is I really believe a great service to the progress of good taste in England, for the excellence of the work itself and the superiority of the particular kind of engraving for pictures possessing precision of form and brilliancy of light will be at once recognised by your subscribers [...]".

Slightly wrinkled. From the collection of John Henderson (1862-1938), the long-serving secretary of the National Liberal Club. 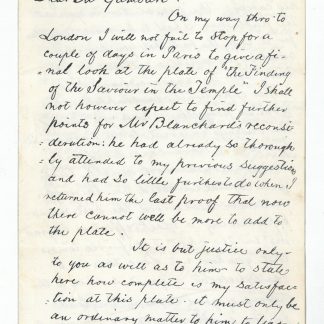