[Keying]. A Description of the Chinese Junk "Keying".

8vo. 31, (1) pp. With frontispiece and 4 plates with wood engravings, of which one signed [Ebenezer] "Landells", as well as 8 text illustrations. Thread-stitched in original pale orange wrappers with decorative title printing in red and green. Printed for the proprietors of the junk and sold only on board.

Exhibition catalogue for the Chinese trade junk "Keying", at anchor for visitors against admission in the London Docklands in 1848. Personalised copy of the Swedish visitor Carl Peter Freidenfeldt, with autograph of and stamped by the Mandarin on board, He Sing.

The "Keying", an impressive 3-masted 800-ton sailing ship, was the first Chinese vessel ever to sail from Hong Kong to New York and further to London. The junk had been purchased in 1846 in secrecy by unknown British businessmen in Hong Kong, defying a Chinese law prohibiting the sale of Chinese ships to foreigners. Loaded with artefacts and oddities of Chinese culture and sailing with a mixed crew of Chinese and British sailors under the command of Captain Charles Alfred Kellett, the "Keying" reached New York in July 1847 and fast became an attraction serving as a kind of floating ethnographic museum.

In late March 1848, the "Keying" arrived in London to great fanfare, anchoring in the London Docklands, at Blackwall. Several different medals were struck to commemorate its appearance, including one that had a bust of Mandarin Hesing. The ship was visited by Queen Victoria, whose right to be the first European woman to visit it was reserved, as well as by the Duke of Wellington and Charles Dickens. It has been suggested that the Chinese Emperor was aware of the project from the start and was secretly kept informed about it, and that the mandarin served as an informer to report back in detail. Visitors were "received by a Mandarin of Rank and a Chinese Artist of Celebrity" (promotional text on rear cover).

Apart from the description of the ship as a whole, the cook-house and the decks, the present catalogue also contains an annotated and partly illustrated list of Chinese objects (musical instruments, weapons, tableware etc.) exhibited in different parts of the ship.

The wood-engraved plates are captioned "The Keying", "Portrait of Hesing", "Stern of the Keying", "After Deck", and "Saloon".

Ink ownership of "C[arl] P[eter] Freidenfelt, London den 15 Aug. 1848", at the upper edge of front cover. Front flyleaf (recto of 1st plate) with two red ink stamps depicting Chinese characters, one of them being the seal of Prince Hui Rui. Above and below the signature "Hesing" and the word "Keying" in Latin and Chinese letters written in bold ink; at top and bottom of the page a tiny ink comment in Swedish by Freidenfelt: "Anm: Nedanstående är måladt med pensel af den Chinesiske mandarinen Hesing ombord på den Chinesiska Junken den 15 Aug. 1848 på Londons redd. Då jag besökte Mandarinen, fann jag honom läsande Nya Test. på Chinesiska. Han sade på engelska 'a very good book; makes good for the heart.' (Note: The following is painted with a brush by the Chinese mandarin Hesing aboard the Chinese Junk on Aug. 15th 1848 at London's docks. When I visited the Mandarin, I found him reading New Testament in Chinese. He said in English 'a very good book; makes good for the heart'". 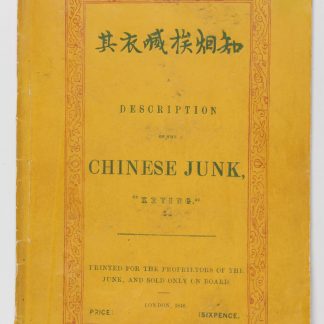