"It is the unreal that the roots of reality plunge into": Eugène Ionesco on the avant-garde

Important text about artistic creation and the avant-garde, published in "Les Lettres françaises" of 17 April 1958 as part of the survey: "What is the avant-garde in 1958?". In Ionesco's view, art must strive to express realities that are "new and ancient, present and inopportune, living and permanent, particular, and, at the same time, universal". A label like "the avant-garde" is a mere afterthought to this goal: "To want to be part of the avant-garde before writing, not to want to be part of it, to refuse or choose an avant-garde is, for a creator, to construe things the wrong way round". For Ionesco the avant-garde is "only the current, historical expression of an inactual actuality (if I may say so), of a trans-historical reality". Therefore he is very sceptical of political art, as the work of art "is nothing if it does not transcend the temporary truths or obsessions of history". Several artists, historical and biblical figures are mentioned as examples of the "profound universalism" Ionesco is arguing for, including Buddha, Shakespeare, the Spanish mystic Juan de la Cruz, Proust, Chekhov, Brecht, and Picasso. In his own work, Ionesco tries "to say how the world appears to me, what it seems to be for me, as sincerely as possible without concern for propaganda, without intention of directing the consciences of contempraries. I try to be an objective witness in my subjectivity". The essence of his theatre is the contradictory, the absurd: "Since I write for the theatre, I am only concerned with personifying, embodying a comic and tragic sense of reality at the same time." Ionesco describes a childhood memory of a senseless act of violence which first invoked the feelings of vertigo, anguish, and transience that he tries to convey in his art: "I have no other images of the world apart from those, expressing the ephemerality and the harshness, the vanity and the anger, the nullity or hideous, useless hatred. This is how existence continued to appear to me". In closing, he aims to reconcile avant-garde and "living tradition", past and present: "One has the impression, also, that the more one is of one's time, the more one is of all times (if one breaks the crust of superficial topicality) [...] The youngest, newest works of art are recognizable and speak to all eras. Yes, King Solomon is my leader; and Job, this contemporary of Beckett".

With a stricken-out title "Avant-garde et tradition", corrections, and typograph marks. The first three pages with a tear minimally affecting the text. Some black fingerstains and stains, minor tears, and browning. 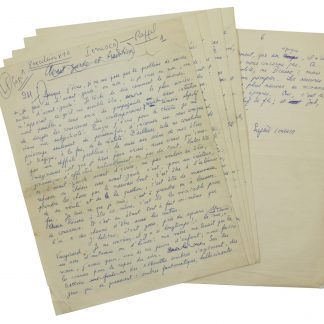