Large 4to. Issues 1 through 12 (January-December) in one volume. 96 (instead of 100), (4) pp. Contemporary marbled boards with handwritten spine title.

The complete first year of this monthly journal issued by the just-founded German-Chinese Foundation, a Hessian missionary society. "The Chinese Foundation (or Kassel Missionary Society) (CS) was established in 1846 as the Deutsch-Chinesische Stiftung by members of the Evangelische Missionsverein in Kurhessen (founded in 1833) in response to Karl Friedrich Gützlaff's appeal for support of his 'Chinese Union' at Hong Kong [...] Sectarian friction in the Evangelical Missionary Society in Electoral Hesse [...] hastened the demise of the CS after 1855. The China work commenced in 1840 with the arrival of Karl Vogel at Hong Kong" (Tiedemann).

Articles include: Protestant missionary activity for China from 1805 until the Anglo-Chinese War; Gützlaff's latest journey to Northern China; The Imperial Tolerance Edict; North Chinese emigrants to Mongolia; The effectiveness of the Christian Association in Hong Kong; The imprisonment of the Catholic missionary Mr. Carayon in China; Chronicle of the German-Chinese Foundation; News about the missions in Hunan and Hupi, etc., as well as a list of the missionary activities in China.

The two final appended leaves discuss the purpose of the Foundation as well as the arrangement of the periodical, which from 1850 onwards was published quarterly as "Quartalberichte der Chinesischen Stiftung" (cf. Kirchner).

Issue 7 lacks pp. 55-60, containing the text of a letter from the board to Gützlaff (cf. Walravens 26). Hinges weakened; endpapers a little foxed; some browning throughout. Traces of old folds, but generally well preserved. Very rare; only three copies in OCLC. 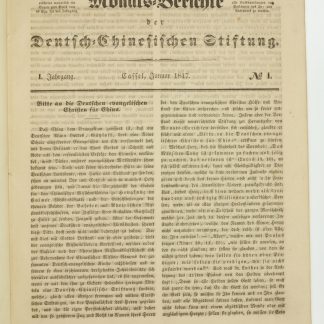