A Hamburg Three-Master in the East China Sea

Diligently kept naval log of a long China voyage on a Hamburg-based ship undertaken soon after the Second Opium War, at the time of the Tianjin Massacre, during the early years of the rule of the Tongzhi Emperor. The Chinese ports of call range from Hong Kong on the South China Sea and Shanghai on the East China Sea to Tianjin (near Beijing) on the Yellow Sea.

The journal entries begin with the schooner barque Anna weighing anchor in Hamburg on 17 January 1870; they cross the Sunda Strait on 23 April and reach Shanghai on 1 June. After a layover, the course is set for Tamsui, then for Chifoo (Yantai) and Tientsin (Tianjin), and onwards to Hong Kong, Amoy (Xiamen), and Taku, bringing the ship to the island of Penang (George Town) on the Straits of Malacca on 12 March 1872. 14 pages prefixed to the printed form describe how the Anna is taken over at Geestemünde (Bremerhaven) on 20 November 1869, as well as the travel preparations, but also events in the port of Yantai. Apart from precise position readings, weather notes, and other navigational records, the book also contains information in brief regarding disciplinary measures, damage suffered from ice jams, celebrations on board, etc. Until 21 June 1870 the logbook is maintained by the chief helmsman Thomas Brügeman, after which date a different writer takes over.

The Anna (ex Malvina), built and launched in 1859, was a barquentine of 227 register tonnes, sailed by a crew of ten men under captain Carl Eisenmenger, who was also the owner of the ship. 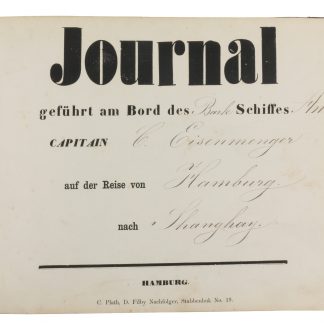