Two groundbreaking works in the history of medicine

First Latin edition of the first two books, namely the medical and therapeutic section, of "al-Tasrif", a 30-volume Arabic encyclopaedia on medicine and surgery written ca. 1000 CE by the Arab physician Abulcasis, edited by the physician Paul Ricius, and containing "what is probably the earliest description of haemophilia" (Garrison/M.). Abu al-Qasim, hailed as the "father of modern surgery", specialized in curing diseases by cauterization. He designed several devices used during surgery for purposes such as inspection of the interior of the urethra, applying and removing foreign bodies from the throat, inspection of the ear, etc. In his "Tasrif" he described how to ligature blood vessels almost 600 years before Ambroise Paré. Al-Qasim was also the first to describe a surgical procedure for ligating the temporal artery for migraine. His use of catgut for internal stitching is still practised in modern surgery.

II: Second Latin edition of the "Medical Compendium" by the 7th century Byzantine physician Paul of Aegina, translated by the humanist and physician Johann Winter from Andernach, first published in Paris in 1532. The "Medical Compendium" in seven books remained a standard text throughout the Arabic world for more than eight centuries. The most complete encyclopedia of medical knowledge of its time, it covers 1) hygiene and dietetics; 2) fevers; 3) topical illnesses from head to toe; 4) skin diseases and ailments of the intestines; 5) toxicology; 6) surgery; 7) the composition of medicines. The sixth book on surgery in particular was referenced in Europe and the Arab world throughout the Middle Ages, and is of special interest for surgical history. Indeed, Paul's reputation was particularly great in the Islamic world: the Arabic translation of his works by Hunayn ibn Ishaq was widely received, and it is said that he was especially consulted by midwives, whence he received the name of "al-Qawabeli", or "the Accoucheur". "Paulus Aegineta was the most important physician of his day and a skilful surgeon. He gave original descriptions of lithotomy, trephining, tonsillectomy, paracentesis and amputation of the breast; the first clear description of the effects of lead poisoning also comes from him" (Garrison/M., p. 7).

Some near-contemporary handwritten marginalia in red and black ink. Bookplate of the French neurologist Maurice Villarett (1877-1946), remembered for his studies and experiments involving precision localization of vascular lesions of the brain, to front pastedown. Binding bears blindstamped initials "BF"; the ornaments include floral and tendril motifs as well as heads and vases. Covers somewhat wormed, slightly rubbed. Interior somewhat wormed throughout, wormholes in the first 21 ff. repaired with Japanese paper. Occasionally brownstained; paper slightly wavy. A good copy of two groundbreaking works in the history of medicine. 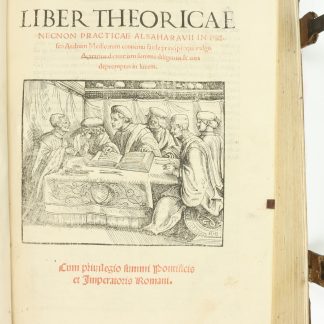