First edition, very rare. Georges de la Chappelle, a native of Caen, accompanied the French envoy Le Haye to the Porte and spent several years in the Levant. His work is known to us almost exclusively through these engravings, showing what Thieme/Becker described as "the prettiest ladies in the Imperial Seraglio". In the introductory text included in this first edition, La Chappelle explains that the series was occasioned by a recent French edition of Chalcocondyles, in which (as he complains) the women's costumes were very poorly drawn. La Chappelle clearly had a special interest in female costume: "his own representations are highly detailed, with special attention paid to the fabulous jewels and fine needlework that adorn the garments of Levantine costume. (According to the preface, the accuracy of his drawings could be attested by Le Haye [...], in whose presence the drawings were executed.) To add verisimilitude to the plates, examples of Turkish, Persian, Tartar, Armenian and Greek costume are depicted against topographical backgrounds showing the areas in and around Constantinople in which the models were most likely to reside" (Atabey). Curiously, several of these backgrounds, when placed side by side, form a near-consecutive panorama of Constantinople and its environs. 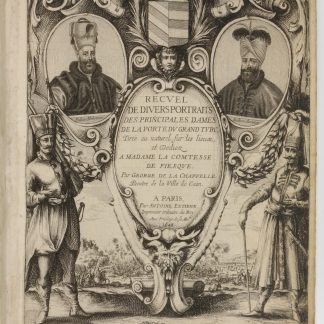