Costumes of the world

First edition of Jost Amman's encyclopedic book of costumes. A strongly fragmented copy, as usual; in the early 19th century, the plates were mounted on backing paper by the owner, the trained landscape painter Jakob Linckh (1786-1841) from Stuttgart (cf. Thieme/B. 23, 254), who also coloured the volume throughout and supplemented all missing parts of the images and even of the text by hand. Linckh, who had studied in Rome, visited Greece in 1810. There he met Byron, who commissioned him to provide the illustrations for Hobhouse's travel book.

Wants 59 plates altogether; the remainder are trimmed closely at the upper edge, and most have severe defects in the lower half. Although the present collection begins with the plate showing the Emperor, as originally issued, the remaining woodcuts follow no apparent order. 20 plates show costumes of Turkey, Arabia, Persia, Egypt, and Ethiopia; others depict Greeks, Russians, and Englishmen. 28 plates show the costumes of today's Italy; German cities are well represented, as are France and Spain, Bohemia and Hungary. Also includes the famous picture of the Brazilian Tupinamba Indians: a man with a crown and belt of feathers, a knife, and a bow and arrow, beside a long-haired woman carrying a baby in a knotted sling. The illustration is an adaptation of two cuts from the "Recueil de la diversité des habits" (Paris, 1562; Antwerp, 1572) by Francois Descerpz, "one of the first likenesses of the Brazilian Indian" (Borba de Moraes). 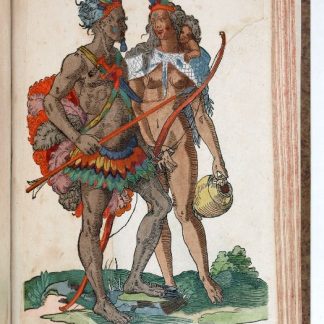