A fine friendship album compiled in the late 18th and early 19th century by a lady from the Pomeranian gentry, containing entries by numerous members of the Pomeranian and Prussian nobility.

The album is illustrated with a wealth of floral watercolour borders and details of various sizes, including a trompe-l’oeil watercolour of sheet music and other papers, the drawing of an old tree, another of a lady mourning at a grave, and several more with painted and monogrammed memorial plates which give evidence of the artistic skills of Caroline's well-wishers. Two dried flowers are sewed onto the page. An engraving captioned, "Mir wird geleistet werden, was mir verheißen ist [...]" shows a female figure with winged temples, sitting in an arbour underneath signs of the zodiac (by C. Frosch after Schnorr v. Carolsfeld, apparently removed from C. Sintenis's "Das Buch für's Herz auf's ganze Jahr", Leipzig 1806). Bound at the front is an entry with embroidered text and illustration on silk, dated 1811; another text entry (by Sophie v. Schlieben, 1800) is entirely embroidered.

As shown by the first entry following the front flyleaf, the album was subsequently owned by another member of the family, also named Caroline von Pirch, from Schidlitz (now Siedlce) near Danzig: there, she states that she received the album on 12 August 1832 as a gift from her good friend, the wife of the district administrator Eduard von Zychlinski (1795-1858). An even later entry, from 1893, reveals that the album was later owned by Agnes v. Mach, another descendant of the family. 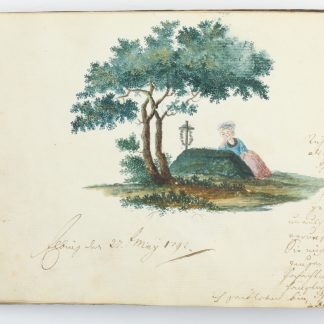