Intriguing manuscript comprising five Arabian tales allegedly recounted by officers at a Spahi camp in Algeria in the context of an imminent raid against the Haschemu tribe loyal to Emir Abdelkader in 1842, commanded by the French general Louis Juchault de Lamoricière (1806-65). The compiler, who gives his initals as "E. H. S. de R." on the title-page, states that he transcribed the tales from another book, but gives no clear indication whether or not the account is purely fictitious. He does, however, criticize the "cruel system of warfare which the French have hitherto employed in Africa" (p. 1).

Prefaced to the tales is an introduction describing the events leading up to the frame narrative, involving the rescue of a Douair chieftain by a member of the Spahi regiment, and the officers spending the evening together at the campfire. Five of them are prompted to tell stories, some autobiographical, which the editor has titled "The Unfortunate", "The Dervish of Anatolia", "The Renegade", "The Arab's Faith", "Love and Hate", and "The Fugitive of Armenya". The last tale is followed by an account of the fate of the two Douair and Spahi officers, who became close friends after the latter saved the life of the former.

The hand-coloured engravings which illustrate the volume depict characters and scenes from the tales; the frontispiece shows a lavishly decorated room in a palace with an Arab leader smoking a long pipe, surrounded by servants and followers. Continuously paginated, but with additional pagination for each tale. The additional heading "First series" on the title-page suggests that the present manuscript was conceived as part of a larger set. 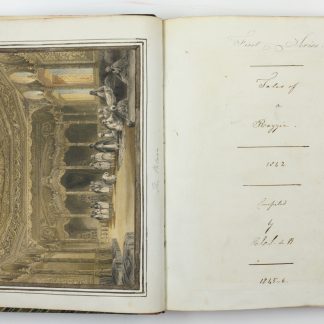