The most spectacular sea-atlas ever published: a magnificent copy with noble provenance

First edition of the undoubtedly most beautiful and most spectacular sea-atlas of the 17th century, a complete and unusually well-preserved copy with noble provenance: the engravings in publisher’s colour and heightened in gold, bound in decorative publisher’s gilt marbled-leather bindings. "The 'Neptune François' and its second part 'Cartes Marines à l’usage du Roy de la Grande Bretagne' was the most expensive sea-atlas ever published in Amsterdam in the 17th century. Its charts are larger and more lavishly decorated than those of any preceding book of this kind. For the engraving and etching Mortier had recruited the most qualified artists … In 1700, Mortier brought out a third volume with charts of the outer-European waters, of French origin edited by N. P. d’Ablancourt: 'Suite de Neptune François'. Apart from the first volume which had a second edition in 1703, none of the atlases was republished. This magnificent work was intended more as a show-piece than something to be used by the pilots at sea" (Koeman). The second part was engraved by Romeyn de Hooghe, the prolific late Dutch Baroque painter: "This volume is usually bound together with the first part, the 'Neptune François'. It only contains nine large charts, but this small number represents the most spectacular type of maritime cartography ever produced in 17th century Amsterdam" (Koeman).

In addition to the charts called for by the table of contents, part one has a fine world map (Shirley 559). The 3 plates of ships listed at the beginning of the table will be found in part 3, which thus has 19 plates of ships instead of the 18 called for by the table and the 12 (!) mentioned by Koeman. Hardly any browning or foxing; a few light creases to gutters. As usual the copper green colouring in volume one has turned into a brownish hue and caused acidic damage to a few small sections of six maps. From a southern German castle library with small 18th century bookplate pasted to verso of both engraved titles; old shelfmark pencilled to inside of covers. Bindings only slightly worn. Extremely rare: the last comparable copy on the market was the Wardington copy, sold at Sotheby's in 2006 (lot 318), where it commanded £209,600 (also boasting a noble German provenance, colouring and binding like ours). 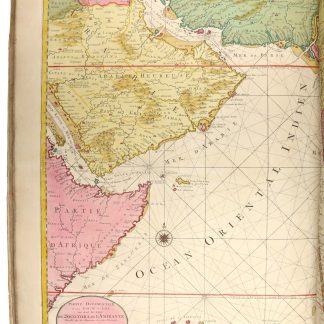