A rare survival: an ensemble of books, mainly medical, formerly in the library of Sultan Abdul Hamid II of the Ottoman Empire, whose famous collection was dispersed following his deposition in 1909.

Of the nine volumes in the present collection, more than half a devoted to medicine. They include a rare account of Turkish military and civil hospitals by the French physician Paul Aubry (1887), constituting an exceptional documentation of health care infrastructure in the Ottoman world. Further, there is a detailed account of the outbreak of the plague in the Levant by the Swedish polymath Jacques Graberg (1841), also describing the situation in Tangier in 1818 and 1819, which the author had witnessed himself. Finally, the collection comprises three rare volumes from the Ottoman Turkish translation of Adolf von Strümpell's medical textbook on internal diseases (1888-91), here focusing on diseases of the heart and the arteries, diseases of the brain, and diseases of the kidneys and bladder.

Additional volumes discuss the political and religious history of Japan, or the Greek Ten Thousand and their march to the Battle of Cunaxa and back in 401 BC. Other titles are more immediately connected with Turkey, giving a capsule history of the Ottoman Empire in French and Turkish verse, or and extremely rare political analysis of the Turkey's position in the critical months preceding the outbreak of the Russo-Turkish War of 1877/78.

The volumes bear the requisite traces of the Sultan's library marks. All are presentation volumes inscribed to the Sultan by the author (some even inscribed in Turkish and Arabic), or are bound in special presentation bindings, or the in Sultan's personal library bindings with his tughra on the covers.

Sultan Abdul Hamid (Abdülhamid) II (1842-1918) was the last Sultan of the Ottoman Empire to exert effective contol over the fracturing state and also remembered as a poet, translator and one of the dynasty's greatest bibliophiles. While his passion for books is memorialized by the many precious donations he gave to libraries all over the world and which mostly have remained intact to this day (including the 400-volume "Abdul-Hamid II Collection of Books and Serials" gifted to the Library of Congress), his own library was dispersed in the years following his deposition: books were removed to other palaces and even sold to Western collectors; the greatest part of his collection is today preserved in the Chester Beatty Library in Dublin. 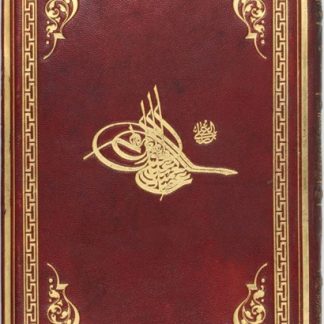