The flying greengrocer: an account of "severall asents" made in the Great Nassau Balloon

4to. 1 p. with integral address panel on verso, bearing a Penny Red stamp.

A letter from the father of Charles Green (1785-1870), the United Kingdom's most famous balloonist of the 19th century, on his own experiences with flying, addressed to the novelist, travel-writer and journalist Catherine Hutton (1756-1846). As Mr. Green the elder relates, "I am now in my 83rd year and have made severall asents [!] with my son who has so long & successfully practised the science of aerestation [!]. My first asent was from Mansfield, Nottingham in 1827, I was then in my 64th year & my second asent was from Glasgo [!] Scotland in 1836 & I have asended 3 times with the Great Nassau Balloon in company with 9 persons each time".

After working at his father's grocery in London, Charles Green would go on to become a professional balloonist following his first ascent in 1821. In 1836 he set a major long-distance record in the balloon Royal Vauxhall, when he flew overnight from London to the Duchy of Nassau in Germany. The context of Thomas Green's address to Catherine Hutton is unknown, but the letter's tone and content suggest he was responding to an enquiry or earlier writing by Mrs. Hutton on the history and perhaps the safety of hot air ballooning.

The letter is well preserved with minimal yellowing to the edges. A folded piece of card affixed to the left-hand edge of the page is the remnant of the letter's earlier inclusion in an album. The address-side of the folio preserves an example of a first-generation imperforate Penny Red stamp with clear borders. The wax seal of the Green family, featuring a hot air balloon and their Latin motto for ballooning "Coelum certe patet ibimus illac" (The sky is very clear, we will go there!) is well preserved. 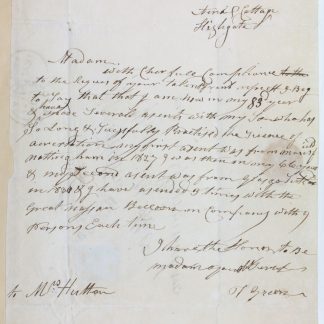