Rare first Dutch edition of any part of "Das Kapital". Contains the first nine chapters of the first volume of Marx's magnum opus, including the prefaces to the first and second edition. Translated by the insurance broker and literary critic Franc van der Goes (1859-1939) after the fourth German edition published by Friedrich Engels in 1890. In a short note the translator expresses his hope that a complete translation will follow shortly. In fact a complete Dutch translation of the first volume would not be published before 1910.

In 1881 the great Dutch socialist leader Ferdinand Domela Nieuwenhuis had published a kind of summary of the book ("Kapitaal en arbeid"). Though Marx showed his appreciation for it, his annotations in a copy presented to him were highly critical. In 1894 there appeared a preprint of the first chapter of the present translation in a brochure edition; the single known copy of this publication is held at the Amsterdam University Library ("Het kapitaal. Kritiek van de staathuishoudkunde [...]").

Van der Goes joined the Social Democratic Party in 1891. He became an ardent propagandist of social democracy and for a time the major theorist of orthodox Marxism in the Netherlands, closely allied to German Social Democracy. From 1899 to 1912 he also lectured in Marxist economics at the University of Amsterdam. 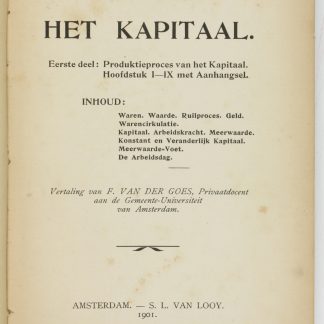