The handwritten title announces "golden models extracted from various authors", under which the compiler has signed his own name, "Le feure". The first and longest single text in the volume, also the earliest, is "De miseria condicionis humane" by Lotario dei Conti di Segni (later Pope Innocent III). A deeply psychological and disillusioned work, it deals with subjects so diverse as procreation, nudity, and death, fear and poverty, pain and compassion, cannibalism, greed, ambition and avarice, drunkenness, lust, unnatural coitus, fashion, the Second Coming, corpses, the underworld, divine judgment, and damnation - themes which set the mood for the excerpts and illustrations added to the volume in the early 16th century, mainly by Jean Le Fèvre himself.

Le Fèvre served as canon of Langres and Bar-sur-Aube from 1548 to 1558, taught in Paris and was a university attorney. His knowledge extended beyond theology to mathematics, music, emblems and the mechanical arts (especially chronometers); he left a manuscript dating from 1527 which deals with the construction of sundials. Lefèvre's personal tastes left their mark not only in the selection of texts included in the volume, but also in the illustrations, which range from the whimsical to the grotesque: they include monsters and emblematic material as well as scenes from the Lives of the Saints and specimens of the 'vanitas' genre, some vividly coloured. Throughout, Lefèvre pasted relevant fragments of letterpress text which he must have clipped from incunables at hand - a remarkable example of an intertextual scrapbook in the early Renaissance. Lefèvre's penchant for mechanical solutions to recurring problems is evident from the fact that he drew and cut (or commissioned) several different woodblock stamps for manicules and the annotations "vide" and "nota" (bene), as well as his own name, which he then inked and stamped into the margins on numerous pages, rather than write or draw them anew by hand every time. Underlinings, by contrast, are repeatedly elaborated into shaded, three-dimensional banners enclosing the highlighted text. A remarkable, well-preserved and in many ways unique manuscript miscellany deserving of more thorough scholarly investigation.

Provenance: Convent of the Dijon Carmelites with handwritten 17th century ownership "Ex Bibliotheca PP. Carmelitarum Divionensium" on fol. 2r; several manuscripts with the same joint provenance of Lefèvre and the Dijon Carmelites survive in the Bibliothèque de Dijon). Later in the manuscript collection of the Dijon lawyer and antiquary Louis-Bénigne Baudot (1765-1844) with his handwritten signature to front pastedown; by descent to Baudot's great-grandson, the collector Paul Court (his engraved bookplate to pastedown).

3 uncounted leaves contain notes and extracts from various classical authors (Seneca, Horace, Sallust) and from the Psalms, apparently dating at least in parts from the 16th century. The recto of the third leaf is illustrated with three ink drawings: a king, a monk, and a lady accosted by death dressed in various appropriate costumes.

41r Headed "Le Fevre" at its beginning, followed by a handwritten sentence and two incunabular clippings, both alchemical. On verso a full-page ink and watercolour drawing of the Crucifixion with 2-line title and 8-line text at the bottom of the page.

46v–50v disputation between Catherine of Alexandria and the pagan philosophers of Maxentius; the shattered wheel and her beheading are shown von 50v; 51r a page of verse in the same hand.

61r six lines of verse and large woodblock print of St Andrew and the Church Fathers.

88r half-page ink drawing of a man with a stick, addressing a male figure whose face is covered with hair, perched upon a wheel and holding a clock (a subject on which Lefèvre was competent), before a bald female figure upon a column, illustrating the Catonic proverb, "hairy in front, occasion is bald behind".

114v and pastedown covered with short notes, manicules, sequences of numbers and calculations. 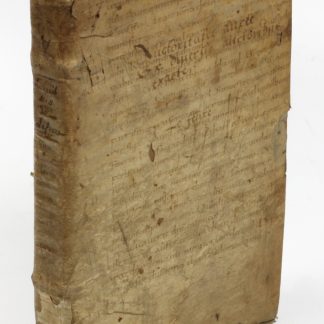