First and only edition. Monumental annotated edition of the famous Akbar manuscript of the Hamzanama epos, based on the 60 folia located in Vienna. The Hamzanama narrates the fantastic adventures of Amir Hamza (Hamza ibn Abdul-Muttalib), an uncle of Muhammad, who with his band of heroes fought against the enemies of Islam. The stories, from a long-established oral tradition, were written down in Persian in multiple volumes presumably in the era of Mahmud of Ghazni. In the West the work is best known for the enormous illustrated manuscript commissioned by the Mughal Emperor Akbar around 1562. The size of the commission was completely unprecedented, and stretched even the huge imperial workshop. According to contemporary accounts, about 30 main artists were used, and over a hundred men worked on the various aspects of the book in all. One side of most folios has a painting, about 69 x 54 cm in size, carried out in a fusion of Persian and Mughal styles, while the other side is usually written on in Persian in Nasta'liq script. At some fairly early point, the Akbar manuscript became dispersed, and only a little over a hundred of the paintings survive. The largest group of 60 folia is stored at the Museum of Applied Arts, Vienna (Österreichisches Museum für angewandte Kunst - MAK), with the rest spread over many collections. The Victoria and Albert Museum possesses 27 images, bought in Kashmir, and the British Museum in London has one.

The present edition includes a description of the manuscript fragments held at the MAK, the Victoria and Albert Museum and other collections, as well as a German translation of the 60 leaves of the MAK by the art historian Glück (1889-1930), and a detailed account of the illustrations. The high-quality collotype illustrations were produced by the studio Max Jaffe in Vienna, conveying an impressive idea of the original illuminations. 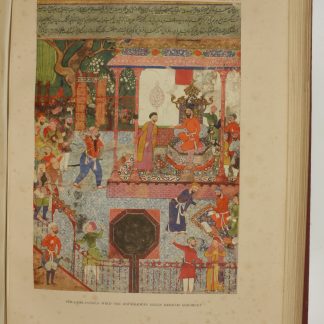