Only issue of this edition of the text, with commentary, Latin translation and a loose German version of an Arabic poem by Ibn Saiyid an-Nas, a Persian one by Nizami, and a Turkish one by Emri. Following his dissertation, this was the first great scholarly publication by Johann Gottfried Ludwig Kosegarten (1792-1860), who later assisted Goethe with his "Diwan". In 1817 he was made professor of oriental languages at Jena.

Some browning due to paper; inscribed to a "Dr. Vermehren" (dated 1816) on front pastedown. Although the print shop used by the publisher was equipped with Arabic, Persian and Greek types, no types were available for the passages in Sanskrit and Armenian: these few words, on p. 48-49, had to be supplied in manuscript (possibly by the author himself?). 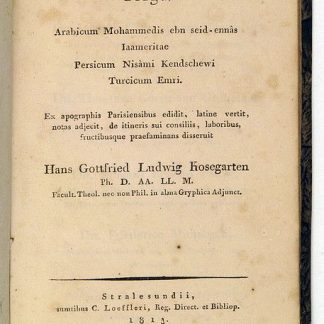