1 text volume and 2 portfolios with lithographed plates. Oblong folio (plates and their portfolio, ca. 64 x 40 cm) and folio (text volume, ca. 41 x 32 cm). Text volume: 30, [1], [1 blank] pp.; plus 100 lithographed plates. Text volume with the title printed in gold. With a total of 100 lithographed plates over 2 portfolios: 72 plates numbered I-LXIV, printed on gray or white paper and mostly printed in brown, some in gray, gray & white or brown & white, one in gold (plate I), one in colour (plate LXIV) and one plate is folding (plate LX), and 28 overlays, printed in brown on tissue paper. Each plate is embossed with Wright's blindstamp. Kept loose, as issued, in the original two portfolios (64 x 41.5 cm), both dark blue half cloth with the original publisher's printed grey wrappers over boards with all white ties present. Both portfolios and text leaves are kept in a larger, later beige half cloth portfolio (ca. 65 x 43 cm) with brown paper sides, three protective flaps and white ties.

Extremely rare first edition, of the complete collection of plates prepared from drawings made by master architect Frank Lloyd Wright (1867-1959) at his Oak Park Studio, illustrating seventy buildings and projects completed between 1893 and 1909. It is the first major publication by one of the true innovators of modern architecture. The work boosted Wright's fame in European architectural circles and influenced key figures in contemporary architecture such as Ludwig Mies van der Rohe, Peter Behrens and Le Corbusier. The plates show perspective views, plans, sections and interior and exterior details. Plate LVI, with an interior view of the living room of the Coonley House, is one of the most important and desirable of the series. Other works represented are the Frederic Robie House, Susan Lawrence Dana House, Ward Willets House, Darwin Martin House, Avery Coonley House, the Larkin Building, and Unity Temple, showing the variety of his buildings.

Although each plate is embossed with Wright's blindstamp, Sweeney notes that he completed the work alongside assistants and collaborators, including Marion Mahony Griffin and Wright's son, Lloyd. A massive undertaking, the work was printed by Ernest Wasmuth. The original plans and presentation drawings had to be lithographed on large stones. The text volume, written by Wright, was printed both in German and in English, containing an essay on his architectural style and a list of the plates. The text part starts with the introduction by Wright, translated into German by Wasmuth, and is dated ''Florenz, Italien, 15. Mai 1910'', followed by an annotated list of plates (pp. 21-30). An English version of the introduction was printed in Chicago by Ralph Fletcher Seymour, dated "Florence, Italy, June 1910".

The edition is scarce due to the fire at Wright's home and studio, Taliesin, in August 1914. The fire destroyed the bulk of the American copies of this portfolio, in addition to much of Wright's other work. Many of the copies intended for the American market were destroyed, for which reason the work was far better known in Europe than in the United States.

Large half beige portfolio worn: a little stained, edges a little worn, head and outer protective flap half loose, bottom protective flap loose but present, linen ties somewhat frayed. Two ties of the second plate portfolio are torn and frayed. Text volume: some plates and the wrappers of both portfolios somewhat foxed, some plates with some occasional marginal tears (never affecting them), overlays a little toned. Overall a complete set with the plates, booklet and the two original publisher's portfolios still in good condition, being Wright's extremely rare magnum opus which secures his status in Europe and being one of the most influential architectural publications of the century. 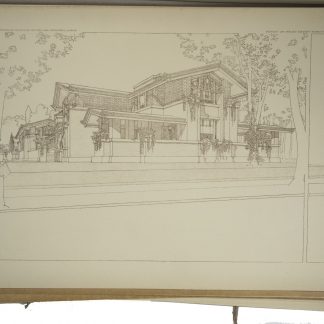