Carol lived in exile in Paris from 1926 to 1930 due to his morganatic marriage to Magda Lupescu and his subsequent exclusion from the line of succession. Upon King Ferdinand's death, Carol's son Michael acceded to the throne at the age of five in a regency headed by Carol's younger brother Prince Nicolae. The regency was overthrown in 1930 and Carol was offered the crown of Romania. He ruled until 1940, when he was ousted by Marshal Ion Antonescu and succeeded by his son Michael.

Together with a portrait postcard depicting Carol II with an inscription to Belin by a Romanian captain (Paris, 22 Dec. 1927).

The telegram draft shows ink damage affecting the text and signature. The letter card on stationery with mourning border. 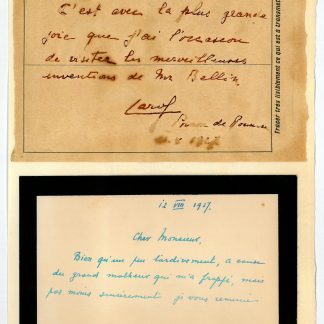