First edition. "Quadruple Two, I should explain, is the internal telephone number at the American Embassy Residence, Vienna [...]" (Preface). Inscribed by the author on the title-page to the Austrian industrialist Georg Mautner Markhof (1926-2008), dated 1973.

The American diplomat John Portner Humes (1921-85) served from 1969 to 1975 under President Nixon as US Ambassador to Austria. His Viennese memoirs, of which this forms the first of two volumes, later appeared in a single volume which was also used for instruction by the School of Foreign Service at Georgetown University. 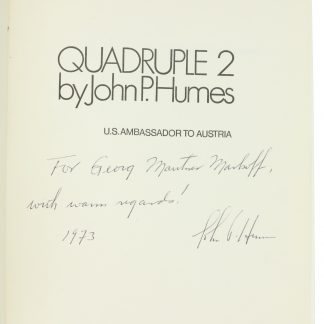