Editio princeps and sole incunabular edition of this two-part medical treatise, drawing strongly on the Arabic physicians who dominated the medieval medical schools of France and Northern Italy. It includes the author's treatise on fevers, based on Avicenna, who is variously quoted and is also referenced in the handwritten annotations. Some of the surprisingly modern ailments discussed include tinnitus, diabetes, and manic depression.

"Concoreggio, born in Milan around 1380, was made professor in Bologna in 1404 before teaching at the Universities of Pavia, Florence and (in 1439) Milan. His works are composed after the model of the Arabs, without much personal observation, and were published as a collection after his death in Pavia around the year 1440" (cf. Hirsch).

Provenance: ink marginalia in an early, probably contemporary, hand. Late 16th or early 17th century ink ownership inscription of Francesco Portidi, physician, on A1r. Evidence of a stamp removed from margin of A2.

Very rare on the market, with only one complete copy selling at auction in the past 50 years (this copy). 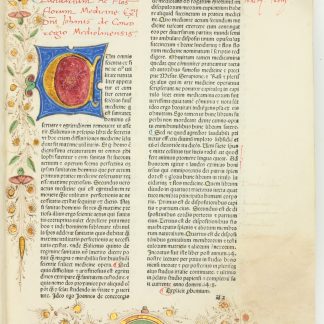