First edition of a pharmacopoeia compiled by the French apothecary Moyse Charas (1618-1698). The pharmacopoeia begins with an extensive introduction to ancient (Galenic) and modern (chemical) pharmacy. Charas was among the protagonists in favour of the chemical pharmacy, however, he did not thoroughly reject the Galenic pharmacy. "The remainder of the volume was divided almost evenly between traditional and chemical preparations. … In a long section on the elements he openly took the side of the chemists stating that the four elements were insufficient to explain observations. … The chemical section included plates illustrating chemical equipment as well as chemical characters and symbols" (Debus). While Charas wrote several works, the present pharmacopoeia is his best-known and was soon translated into English (The royal pharmacopeia …, 1678), German and even Chinese, and as such the first European medical book translated into Chinese.

With the engraved bookplate of the Espich family ("Insign Espichiorum famil") and small label of the pharmacist Koenig. A few occasional spots, some stains to the title-page and page 9, a negligible waterstain at the head of some leaves, head of the spine chipped, but otherwise in good condition. 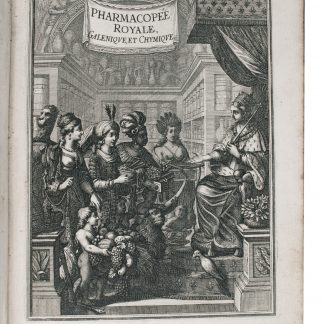