Lopes de Castanheda, Fernão. The First Booke of the Historie of the Discoverie and Conquest of the East Indias, Enterprised by the Portingales, in their Daungerous Navigations [...].

First English edition of one of the most important historical works of the first great age of discovery, "very rare" (Hill). The author mentions several journeys to the "Moores of Arabia" (27r), such as one in 1487 "to Toro, which is a place that hath his harbour in the Straights of the red Sea in the Coast of Arabia", and other places "in the selfe same Straightes of the Redde Sea" (2v), the ships also passing by "Ormuse" (Hormuz, 3r) on their return journey from India to Cairo.

Most of the "Historie" is devoted to the great Portuguese thrust into Asia in the early 16th century, chronicling their epic expansion to India, the East Indies, and China between 1497 and 1505. Castanheda himself spent some two decades in the Portuguese colonies in the East, and so was well equipped to write this account. It is one of the primary sources for the early Portuguese trading empire, a model that the British were beginning to emulate at the time of publication. This work is equally important, however, for its American content, being the first to describe in detail the voyage of Cabral and his discovery of Brazil in 1500, while on his way out to the East Indies. Cabral's landing is the first recorded there, recounted in Chapters 29-31 of the present work. "A most interesting and rare book" (Sabin).

Originally published at Coimbra in 1551, the book was translated by "Nicholas Lichefield" (probably Thomas Nicholas, the well-known translator of the Tudor era). This edition is appropriately dedicated to Sir Francis Drake.

Binding lightly rubbed in places, but still very presentable. A few near-contemporary annotations and manicules. Upper corner of title-page professionally repaired. Front pastedown shows engraved armorial bookplate (ca. 1700) of the barrister-at-law Herbert Jacob of St Stephen's (Hackington) in Canterbury, who bequeathed his books to the Inner Temple, London. Subsequently removed from the Inner Temple Library, now bearing their winged-horse crest in gilt on upper cover, engraved bookplate on pastedown and two different ink stamps to title-page and variously throughout. Offered by Hordern House, Sydney, in 1998 and sold to the San Francisco collector Bruce McKinney; the lower pastedown shows the bookplate of his 2009 sale. A scarce title with good provenance, in an appealing modern binding. 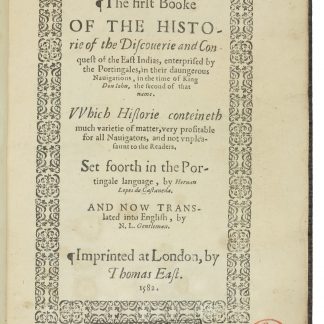 You're viewing: Lopes de Castanheda, Fernão. The First Booke of the Historie of the Discoverie and Conquest of the East …London, 1582. € 85,000.00
Add to cart