Very rare, monumental wall map of the Ottoman Empire, featuring one of the largest and most detailed printed representations of the Arabian Peninsula produced in the Islamic World prior to World War I. Perhaps more than any other map, it reveals the immense logistic challenges faced by Hajj pilgrims just in advance of the construction of the Baghdad and Hejaz Railway systems. Printed for official use, the map appeared at a time when the Sublime Porte was going to great lengths to shore up its authority in the Red Sea region (Hejaz, Asir, and Yemen), while being pressured by Britain to retreat from the domains it claimed in the Arabian Gulf (Kuwait, Al-Qatif/Hofuf, and Qatar).

Indeed, the present map would have been of great value to Ottoman generals and cabinet officials for strategic planning, as Arabia was increasingly a focus of global attention and interference. It served as the ideal strategic aid to chart the future construction of the Hejaz Railway (built 1900-08) and the Baghdad Railway (extended from the Anatolian Railway, from 1903 onwards) and delineates some of the world's most strategically important railway lines before 1900.

The main map encompasses most of the Arabian Peninsula, from Qatar and the Hadramaut westwards (while far eastern Arabia, including Oman and what is today the United Arab Emirates is featured in an inset, lower left). The coastlines and rivers are crisply depicted; mountain ranges are expressed by delicate tan shading; all cities and towns of note are labelled; the names of regions and tribal areas are revealed, while all key roads and Hajj caravan routes are delineated. The map features stellar coverage of the western Gulf region, labelling Qatar (then an autonomous part of the Ottoman Empire), Bahrain (a British protectorate prized for its fine natural harbour), and Kuwait, an autonomous Sheikhdom within the Ottoman Empire that would shortly become a British protectorate. Inland, the map details the Saudi-Wahhabi domain Nejd, with its capital Riyadh, while to the northwest lies the territory of the rival Al-Rashid clan, with its capital Ha’il.

Osmanli cografya literatürü tarihi [History of geographical literature during the Ottoman period], pp. 756f. David Rumsey Map Collection 13186.000 (the single other copy known in the trade). Not in Al-Qasimi collection (1493-1931). 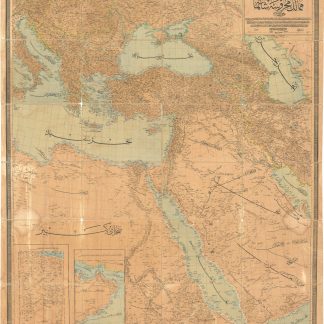