Large collection of authentic material relating to one of Adolf Hitler's closest associates. Comprising in total:

II: Goebbels's high school maths workbook. Ca. 1918. 8vo. 60 pp. Goebbels has written his name on the title-page and filled the book with mathematical equations and logarithms, precisely written in pen and pencil.

III: Goebbels's registration book for classes he took at the Julius Maximilians University (Würzburg) in the winter semester of 1918/19. 8vo. 24 pp. Goebbels has signed his full name on the cover, along with his city of residence and his course of study ("German Studies"). Within he lists the classes taken, professors' names, and class fees.

IV: Typed letter signed from his father Fritz Goebbels. Rheydt, 14 Nov. 1918. 1 p. 4to. On the verso of the letter, Goebbels, at the time drinking heavily, has signed his name 28 times as "Goebbels", seven times with his familiar "Ulex Goebbels", and seven times as "Ulex".

XIII: Autograph poetry manuscript. Ca. 1920. 1 p. 8vo. Unsigned, titled "In vielen Naechten" ("In Many Nights"). On the verso are several lines of personal notes, signed "D. U.", probably also by Goebbels as his familiar "Ulex".

XV: His very early familiar signature and interesting addition: "Ulex Goebbels from the little child". On the 36mo cover of a 1920 calendar cover page. 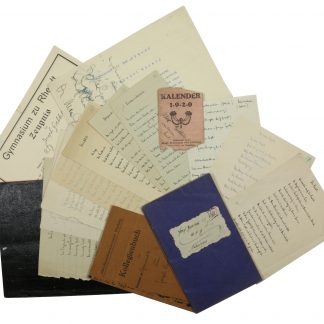