Extraordinary account of a fire in the port of Algiers planted by the British pirate-hunter Richard Gifford. Of the utmost rarity: "unknown to Lowndes, and other bibliographers" (Libri). Only two library copies traceable internationally (St. Pancras Library, London, and Amsterdam University Library).

On Holy Tuesday 1604, in the service of the Duke of Tuscany and under the pretext of becoming a pirate, Gifford set the Algerian galley fleet on fire in the notorious pirate-ridden port of Algiers, causing fierce retaliation by the Algerians. "Although he escaped and there was not much damage done, about a dozen Englishmen including his abandoned crew members were all executed. Furthermore, the pasha banned English ships, Janissaries seized English citizens and arrested English merchants, confiscating their goods for the damage done by Gifford" (Güvenç).

"During the Anglo-Spanish wars Captain Richard Gifford had served under Sir Francis Drake and Sir John Hawkins [...] after the wars he became a pirate-hunter, a freelance mercenary hired by the grand Duke of Florence to extirpate the infamous nest of sea rovers at Algiers" (Bak). 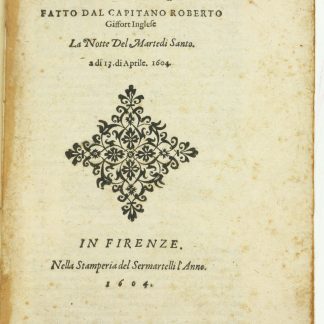