First edition. A rare publication relating to the Frankfurt imperial elections of 1519, documenting the fruitless campaign launched by the French King Francis I in his attempt to be elected Holy Roman Emperor. The title-page features the "chained sartyrs" woodcut border by Hans Weiditz, a recurring illustration in Grimm & Wirsung productions. Attempting to sway the electoral committee in the French candidate's favour, this flattering address metaphorically compares the seven electors to the seven-star cluster of the Pleiades, who are said to outshine all other German princes in their power, wisdom, nobility, and splendour. Despite his efforts, which involved a bribe of 300,000 guilders, Francis lost the election to the Habsburg candidate Charles V.

Light browning; oversized title-page folded in. Not seen at auction since 1994. 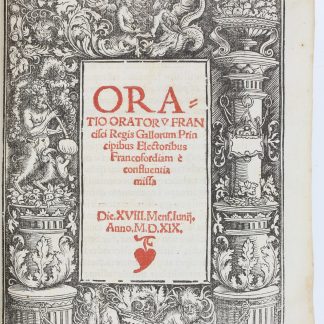