The Royal Württemberg stud, the first Arabian stud in Europe

Oblong folio. With 18 tinted chalk lithographs by L. Ekeman-Allesson after R. Kuntz. With lith. title, lith. dedication and 3 ff. of letterpress text. Stored in a modern half morocco leather case.

First and only edition. Commissioned by the Board of the Württemberg Stud, the first Arabian stud in Europe, this almost unobtainable series of large format plates shows the Stud's full-blooded Arabian horses with decorative oriental backgrounds. The plates constitute extremely early examples of chalk lithographs (listed individually by Winkler, Frühzeit der dt. Lithographie, 180, 57). Kuntz (1797-1848) was known for his "excellent depictions of horses" (cf. Thieme/B.); throughout his brief career he studied thoroughbreds in England, Hungary, and Paris as well as in Germany. In 1832 he became Painter to the Court of Karlsruhe, Baden; he suffered a stroke in 1846 and died in the newly-founded Illenau mental hospital.

Of the utmost rarity, no copy of the complete series with all three issues as present here traceable in auction records. 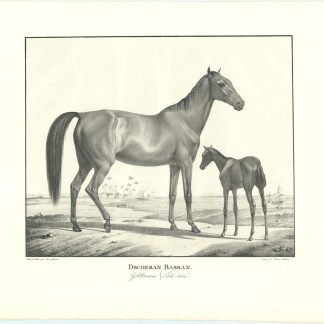