First Swedish Translation of the Quran

First Swedish edition: the pioneering, first complete version of the Holy Qur'an in any Scandinavian language. The translator Fredrik Crusenstolpe (1801-82) was secretary to the Swedish consul in Tanger and a philhellene who had fought against the Ottomans in the Greek War of Independence.

The publication was privately funded by the translator himself: Crusenstolpe, who detected in the Swedish mentality an ignorance and tendency toward superstition which he resented, "felt personally compelled to furnish the Swedish audience with material to rectify some of the misconceptions about the Prophet Muhammad in Swedish popular imagination [...] He described the Prophet as a rational 'Arabic founder of law' (p. iii), in compliance with a common imagery of the Prophet which emerged in the European Enlightenment" (N. S. Eggen, "On the Periphery: Translations of the Our'an in Sweden, Denmark and Norway", in: The Routledge Handbook of Arabic Translation, ed. Sameh Hanna et al.). 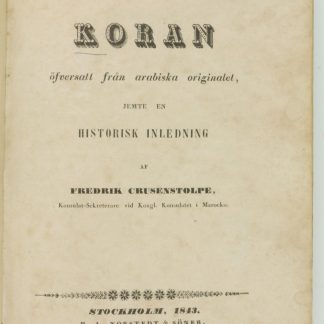