First edition. Important account of travels in southern Arabia performed in 1936, particularly in the Hadhramaut, by the Arabist, explorer, writer, and British colonial office intelligence officer St. John Philby (1885-1960), also known by his Arabian name "Sheikh Abdullah". It describes the longest of Philby's journeys, ostensibly to map the new frontier with Yemen, containing excellent photographs taken for the first time in that area by a European. Until the 1930s the highlands of the south-western corner of Arabia were among the world's few remaining lands not fully explored or charted.

Educated at Trinity College, Cambridge, Philby studied oriental languages and was a friend and classmate of Jawaharlal Nehru, later prime Minister of India. Philby settled in Jeddah and became famous as an international writer and explorer. He personally mapped on camelback what is now the Saudi-Yemeni border on the Rub' al Khali; in 1932, while searching for the lost city of Ubar, he was the first Westerner to visit and describe the Wabar craters. At this time, Philby also became Ibn Saud's chief adviser in dealing with the British Empire and Western powers. He converted to Islam in 1930. The personal contacts between the United States and Saudi Arabia were largely channeled through the person of Philby.

Clear tape on the first page, covering part of the title of the journal without affecting the page or legibility of the text; very slight foxing on the large coloured map (mainly on the back). In very good condition. 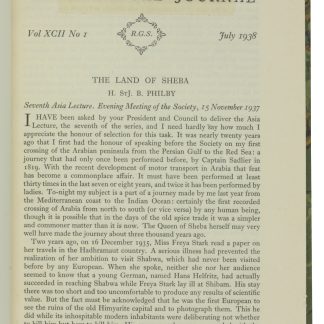