This beautiful letter, written in the dialect of the Venetian merchants known as "zergo", highlights the vast Venetian trade networks in the Middle East. Damascus was of particular interest to the Venetians, as it was one of the few cities in the region where they could rent houses and apartments without restrictions. In the late 15th century as many as 40 Venetians resided permanently in Damascus, and many more merchants, such as Giovanni Andrea di Bartolomeo, visited the city regularly. Damascus offered important trade routes to Central Asia, Arabia, and India, which might have been the origin of the cloth sought after by Piero Alban.

With a small tear from breaking the seal and six pinholes. Occasional damage to the text due to ink corrosion and some browning. 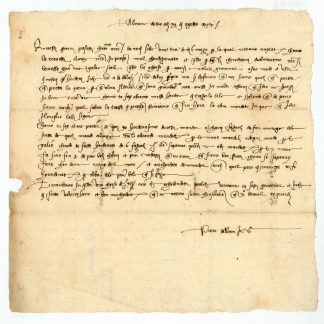