A note in German written to Wilhelmine Taschner, who had asked permission to meet Goethe and perhaps receive a small memento from the poet: "My father-in-law instructs me to let you know you that he much regrets his being unable to fulfil your wish, as his time is currently fully engaged by old acquaintances who are here at the moment. Yours, Ottilie v. Goethe".

In the 1820s Wilhelmine Taschner (1805-82), wife of the Eisenach physician Dr. Friedrich Taschner, visited Weimar and there called on her friend Ottilie von Goethe, receiving the two quills with the attached note. After Wilhelmine Taschner's death her husband gifted the ensemble to his foster daughter Else Dröseke, who married the educator Franz Emil Brandstätter of Witten. In the late 1920s the merchant Paul Geiss of Witten acquired the quills from the estate of Dr. Brandstäter through the intermediation of an acquaintance. Several attempts in the 1940s and 1950s at selling the mementos to the Frankfurt Goethe Museum, the Goethe House in New York, or to the oil magnate J. Paul Getty, were abandoned. The relevant correspondence and a contemporary newspaper report, which certify the provenance, are included. 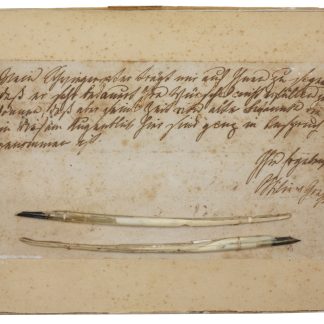