"Your path shall be bestrewed with flowers": The friendship book of a French lady in Russia

Remarkable friendship album kept by Clara Lafontaine, daughter of Pierre François Lafontaine, a French emigrant in St Petersburg and officer in the service of the Tsars. Clara’s brother Jean Baptiste Joseph Lafontaine (1796-1859) returned to France in 1802/03 and became successful as a playwright under the pen-name W. Lafontaine.

The family was associated with bourgeois expatriates in Russia as well as with the local bourgeoisie and aristocracy. Three entries stem from members of the princely Trubetskoy family. With some degree of certainty they can be identified with Sofia Andreevna Trubetskaya (1796-1848) and her children Sergey Vasilyevich Trubetskoy (1814-59) and Maria Trubetskoy (1819-95). Additionally, a beautiful loosely inserted gouache showing a tulip and other flowers is inscribed: "Given by the princess Marie Trubetskoy". Sergey Vasilyevich, who became a cavalry lieutenant and was the legal father of the famous princess Sofia Sergeyevna Trubetskaya, purportedly an illegitimate child of Tsar Nicholas I, enriched his sentimental entry with a swan feather.

The first entry in the book can be attributed to Franz Ludwig von Wissell (1797-1853), who served in the Hanoverian army and rose to the rank of an Lieutenant Colonel. Wissell’s entry is followed by five pages of watercolours, one on blue paper, all by the same hand. The drawings of a man in Persian costume, of an English bulldog, a ruin at night, a remarkable and charming Cupid with bow and arrow in Russian costume, and an infantryman in a blue and white uniform are all inscribed “Meurville” or “Meurville ainé"; while they are of high quality, the artist remains unidentified.

The following entry, a long, humorous narrative describing a friendship book containing rather abortive entries, can with some likelihood be ascribed to the French educator Jean François Antoine Cournand (1797-1842), who lived in St Petersburg with his family and is the father of the pianist and last Chopin student Marie Roubaud de Cournand. An entry by one "Catinka" or Catherine Ratouin from 25 August 1825, apparently the day she left St Petersburg for France, seems to be connected to the previous entry, as it is followed by a watercolour drawing and a washed pencil caricature which are both signed by Courand. A particularly charming, anonymous watercolour drawing on one of the following pages shows a horse-drawn sleigh with two people. The page is marked by a pressed shamrock.

Carla Lafontaine’s young nieces Sophie and Camille wrote charming entries on 26 April 1832 in St Petersburg. While the six-year-old Sophie left mostly scribbles, Camille expresses her sadness about the geographical distance between her and her beloved aunt: "Ma bonne tante je te regrette de tout mon cœur et t’aime de même, pense souvent à ta petite nièce". The final entry can be attributed to the German-British merchant Franz Heinrich Hermann Overbeck (1804-88), father of the theologian Franz Overbeck (1837-1905) who would become known as a close friend of Friedrich Nietzsche. The final two drawings in the album are probably the most striking ones: a pencil sketch of a hound and a washed ink drawing of another hound, both by the same hand. Intriguingly, the pencil sketch is signed "Lagrénée": both Louis Jean François Lagrenée and his younger brother Jean-Jacques were French painters briefly active in St Petersburg, but they died well before the album was started. However, Louis-Jean's son Anthelme-François Lagrénée (1774-1832) followed in his father’s footsteps and spent time in St Petersburg during the 1820s in the service of Tsar Alexander I. As the two drawings are pasted into the album and are of a quality suggesting a trained artist, they may well be the work of Anthelme-François Lagrenée.

Leather somewhat chafed, interior showing some brownstains and browning to the margins, but well preserved. 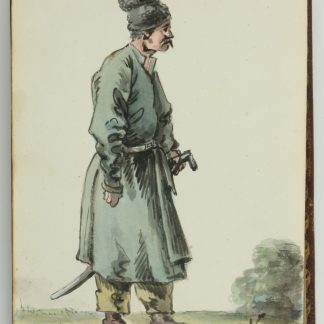