Manuscript in the form of a folded letter entitled "Sheah Relique" that originally enclosed a so-called turbah, here described as follows: "Turbot. A relique of the Sheah Musulmen when they pray they kiss it. It is formed of the earth of Kerbela or Naguf Ashraf a place consecrated to the Shrine of Hussain son of Ally son in law of Mohamed. They place such faith in this that they believe it will keep them from all evils and I hold it from a Persian's own mouth that if a gale of wind was to arise and the ship in imminent danger of being lost, by throwing the smallest particle of this into the sea it would instantly subside".

A turbah is a small piece of soil or clay, often in the form of a seal with imprints, that is used by Shia Muslims during daily prayers to symbolize their connection to the earth. The most favoured soil for the creation of turbahs is that from the site of the shrine of Husayn ibn Ali in Karbala, Iraq, as mentioned in the manuscript. In contrast to what the description suggests, not only soil from Karbala or Najaf Ashraf, another holy city of Shia Islam in Iraq, can be used for a turbah. However, apotropaic properties such as safeguarding against calamities have been ascribed to the "turbah Karbala".

Two worn pieces of leather that originally held the turbah described in the text are still enclosed. On English paper with watermark from 1828. Minor foxing and stains; traces of folds and several large tears not affecting the text. 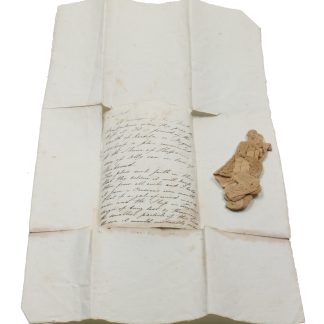