Depicting Bowie onstage as John Merrick in "The Elephant Man".

Bernard Pomerance's play opened on 29 July 1980 at the Denver Centre of Performing Arts for a week-long run with Bowie in the role of John Merrick. Afterwards, the show continued on to Chicago, and then the Broadway stage. The wooden model is based on one Merrick made of St Phillip's Church, which he could see from his hospital room.

A few surface marks and defects, but overall in fine condition. 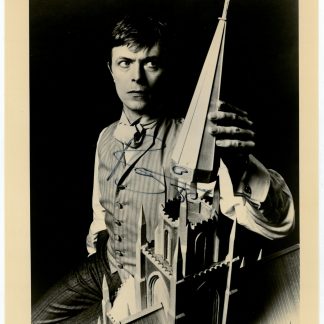