What is to be done? Urgent questions of our movement

First edition, rare. Lenin's famous political manifesto, "the founding document of Bolshevism" (Lih). Lenin prepared this oft-quoted call to arms while in exile in Munich between the autumn of 1901 and February 1902, intending it to appeal to revolutionary socialists and to urge them into taking political action. The pamphlet advocates for better organization of the Russian movement, as well as for greater centralisation of the party and a party newspaper - all considered vital means for success. Lenin harshly criticizes economism and the notion that workers were only concerned with trade union struggle, stating that "the revolutionary socialist's ideal [...] 'should not be a trade union secretary, but a tribune of the people'" (PMM). He argues that revolution could not and should not be staged spontaneously by the proletariat, as Marx had expected, but had to be effected by workers and peasants led by an elite vanguard party of professional revolutionaries - a "party of a new type".

Several largish tears, some repaired. Still a good copy of what is in its essence the "ideological keystone of the Bolshevik Party" (ibid.). 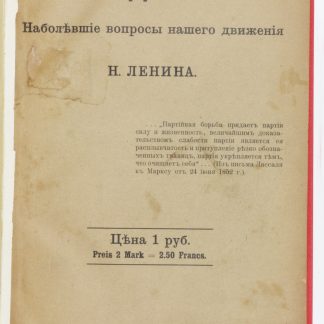