First edition of this manifesto of Leninism: the very scarce elucidation and expansion of the "April Theses", Lenin's statement of the principles that the Bolsheviks must adopt in the evolving revolution. Developed into a coherent party platform, the work was printed in September 1917, one month before the Bolsheviks seized power and put the policies into action.

In April 1917 Lenin returned from exile, and moved to take control of the Bolshevik Party and reorientate it according to his own vision. He wrote and presented his desired policies the same month, urging the Bolsheviks to withdraw their support from the Provisional Government, withdraw from the war, distribute land to the peasantry, and seize power for the Soviets, who would control the production of goods. These policies, since known as the "April Theses", were published in Pravda under the same title as the present pamphlet (The Tasks of the Proletariat in Our Revolution). Despite initially being rejected by a gathering of Social Democrats and then the Bolshevik committee, they were adopted by the party's seventh all-Russian conference in late April. The principles became very popular among the workers and soldiers of St Petersburg, broadening the Bolshevik Party's reach and support. Lenin subsequently developed and expanded the principles of the April Theses into a coherent party platform, which was printed in the present pamphlet in September, comprising effectively a manifesto of Leninism which guided the Bolsheviks as they overthrew the Provisional Government and secured their power. The pamphlet includes a postscript written by Lenin since the first printing of the April Theses, and is appended with the 1915 Zimmerwald Conference resolution calling for the end of the World War.

Wrappers detached; small tears to spine, slightly spotted. Only a handful of library copies traceable, none outside the US or the UK. Last seen at auction in 1972. 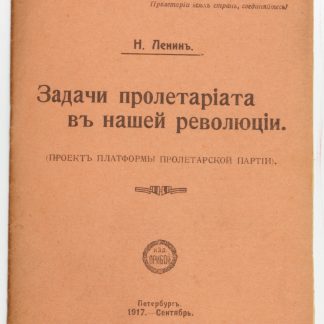