Very scarce, uncommon Russian-language edition of the Communist Manifesto. The translation was prepared by Georgi Plekhanov, who greatly enhanced the 1869 first Russian version made by Bakunin, which had omitted several sections of the German original. The present edition contains the prefaces of the 1872, 1883, and 1890 editions along with Plekhanov's footnotes from his 1900 edition.

Marx and Engels' groundbreaking work of communist propaganda is "undoubtedly the most widespread, the most international production of all Socialist literature, the common platform acknowledged by millions of working men from Siberia to California" (preface to the 1888 edition). In the words of the British economist Harold Laski, the Manifesto is "admitted by every serious student of society to be one of the outstanding documents of all time". It also constitutes an early sum of Marx' and Engels' ideas, later to become known under the heading of 'scientific socialism': "[L]e manifeste renferme en puissance la quasi-totalité des idées élaborées par ses deux auteurs dans leurs ouvrages ultérieurs et qui, dans leur ensemble, représentent ce qu'ils appellent le socialisme scientifique; la seul exception importante est la théorie de la plus-value" (Andréas, p. 1).

Unbeknownst to either author, it would be Russia where the Revolution heralded by the Manifesto would finally take place, under the leadership of their disciple Lenin who did not discover Marxism until after Marx's death (but who was later to prepare his own translation of the Communist Manifesto). 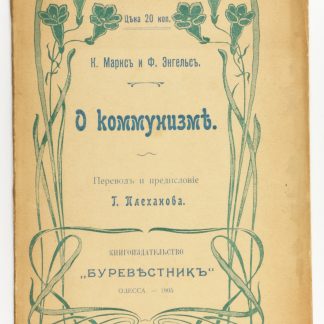