The Second World Congress of the Comintern

First original edition of the conference publication, "The Capitalist World and the Communist International - Manifesto of the 2nd Congress of the 3rd Communist International". Two years after the end of the First World War, and only one after the Comintern had been founded, the Second Congress of the Communist International, representing thirty-five countries, met at Petrograd (St. Petersburg, soon to be renamed Leningrad) on 17 July 1920, continuing its sessions in Moscow to August 7. "Its purpose was to form a clear idea regarding the international situation, to cast a retrospective glance over the road already traveled, and to establish the milestone of further struggle. The World Congress of the Communist International unanimously addresses this manifesto to the workingmen and women of the whole world with the profound conviction that its aims are just and its methods correct" (preface to the American edition, published the same year). Owing to the ad-hoc nature of the 1919 founding convention, the 1920 Second World Congress of the Comintern has been regarded as the first authentic international meeting of the new organization's members and supporters. The gathering is also significant for the participation of Lenin, who took a more active part than any other member, preparing a host of key documents and actively helping to chart the course of the conference. The list of signatories at the end, from 33 countries, is headed by the Russians Lenin, Zinoviev, Bukharin, and Trotsky. The American delegation includes John Reed, author of "Ten Days that Shook the World", only months from his death. The English delegation includes Sylvia Pankhurst, the daughter of Emmeline Pankhurst and like her a prominent suffragist (though, unlike her, a communist). The signing Chinese delegate was Lao Hsiu-chao, who was born in China in 1892 but lived in Russia from age five. "[A]fter the Chinese communist victory in 1949 he held various diplomatic posts in the new regime. In 1954 he was a member of the Chinese People's Political Consultative Conference and in the early 1960s was adviser to the judicial section of the Chinese ministry of foreign affairs" (Lazitch/D., Biographical Dictionary of the Comintern [1973], p. 211).

Browned throughout, with some waterstaining to margins. Still a good copy of a rare work. 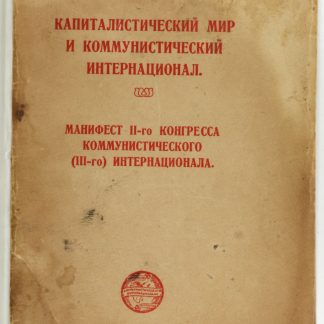