Part four of a pre-Mughal Qur'an commentary, treating the text from Surah XXI, Al-Anbya (The Prophets) to Surah LXXV, Al-Qiyamah (The Resurrection).

Lacks five leaves according to the foliation; some dampstaining; several edge flaws (more severe near the end of the volume), often remargined. Traces of dust in the gutter throughout. In all a fine example of an early Qur'anic manuscript.

Provenance: 1950s private ownership stamp of the "Mohd. Halim Salimi Library", Kandahar, Afghanistan, on fol. 490v. Mohammed Halim Salimi of Kandahar worked in an administrative capacity for the USA's International Cooperation Administration (ICA) Mission to Afghanistan in 1959. In 1960 Salimi applied to the ICA for reimbursement of a lost sum of $123.88; the application was refused on the grounds that Salimi was not in fact an ICA employee but was sub-contracted by the agent Herman Klee (see report B-144148-O.M., 1 Nov 1960). Acquired from Hampel Auctions, Munich. 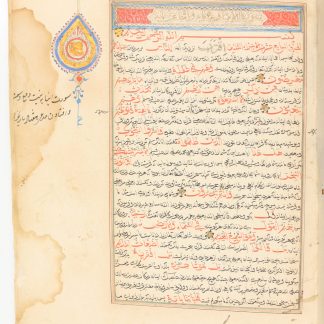