An album amicorum of the international aristocracy, commissioned at the Tsar's court and executed by one of Russia's most prestigious book artists and designers

4to (259 x 182 mm). 4 vols. Altogether 369 ff. with 145 entries. With 13 full-page gouaches and ornamental frames on each leaf, all heightend in gold. Contemporary red velvet with gilt-stamped spines and silk moiré endpapers. All edges gilt. Stored in custom-made slipcase.

The album is beautifully illuminated by the eminent Russian architect and designer Ippolit Monighetti, who was also responsible for the sumptuous book decorations of the famous imperial coronation album of Alexander II and Maria Alexandrovna published in 1856. It is organized as a calendar, each volume comprising three months and each month being represented by a title gouache with biblical quotes and illustrations and one decorated page for each day. An additional title gouache in the first volume shows the calendar year 1855 and the arms of the Grand Duchy of Hesse, as Elisabeth of Prussia (1815-85) was by marriage a Princess of Hesse and by Rhine. The Hessian Lion reappears in the illustration for November, whereas the illustration for June includes a beautiful veduta of St Petersburg. Monighetti signed the title gouache as well as those for January and February; the latter is additionally dated to 1853, which indicates the time and effort invested in this exceptional work of art.

Ippolit Monighetti studied design at the Stroganov Art School in Moscow and later architecture at the Imperial Academy of Arts in St Petersburg. He started his career as an architect with several villas for the Russian nobility in Tsarkoye Selo (Pushkin). These early successes led to his discovery by Emperor Nicholas I, who commissioned Monighetti with the design of the Turkish Bath in Catherine Park in 1850. Many prestigious commissions followed, both for architecture and design, by members of the Romanov family including Emperor Alexander II. The commission of the friendship album for Elisabeth of Prussia was certainly facilitated by Elisabeth's close family ties to the Russian imperial family: Empress Alexandra Feodorovna was Elisabeth's cousin, whereas Alexandra's daughter-in-law Empress Maria Alexandrovna, who left three entries in the album, was a sister of Elisabeth's husband Prince Charles of Hesse and by Rhine. Although it is the only book known to have been illuminated by Monighetti, the intricate ornaments closely resemble his book decorations for the lithographed coronation album of Alexander II and Maria Alexandrovna. Thus, the friendship album of Princess Elisabeth of Prussia is not only unique in the scope of its signatories but also closely connected to one of the most famous illustrated books of the 19th century.

Insignificant chafing to the title illustration for October. Overall very well preserved. Provenance: removed from the library of the Barons de Bassus at Schloss Sandersdorf. 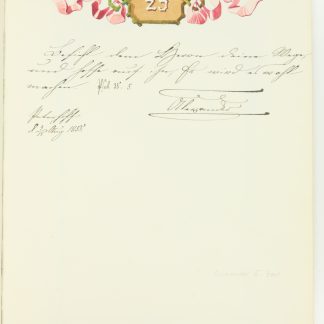