Blueprint map of the Gulf

Blueprint map of the Gulf, showing Qatar, Bahrain, and Kuwait, as well as parts of Saudi Arabia, Iran and Iraq. It pays particular attention to oil fields, naming them individually and illustrating oil pipelines and facilities, including the 435 kilometre Qatif-Qaisumah pipeline which connects to the Trans-Arabian pipeline, as well as the offshore terminal and refinery at Ras Tanura. The map records some of the problematic borders within the region, showing the Iraq-Saudi Neutral Zone, the Kuwaiti-Saudi Neutral Zone and Buraimi Oasis. Among the more notable oil fields are Greater Burgan, the world's largest sandstone oil field, consisting of the Burgan field itself along with the much smaller Magwa and Ahmadi fields, as well as the Wafra field discovered in 1953 by the American Independent Oil Company and Pacific Western Oil Company. Wafra was unique in being operated jointly under separate concessions from two countries, Kuwait and Saudi Arabia, granted to American Independent Oil Company and Getty Oil Company (formerly Pacific Western Oil Company) respectively. 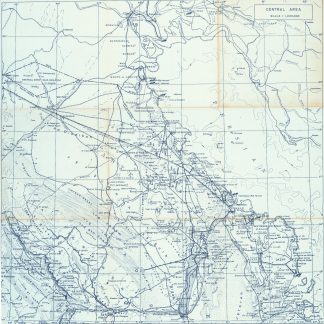