Early map of Russian Armenia, featuring the eight provinces annexed by Russia in 1828, with key in French and Russian. Following Qajar Iran's defeat in the Russo-Persian War (1826-28) and the 1828 Treaty of Turkmenchay, Eastern Armenia was, among other territories, ceded to Russia. It would remain part of the Russian Empire until its collapse in 1917.

Printed at the Mechitarists' press on the island of San Lazzaro, Venice, where the Armenian order had set up their colony in 1717. They began their editorial activities as early as the following year and set up a printing press, famed for its typographic capability in many languages and alphabets, in 1789. 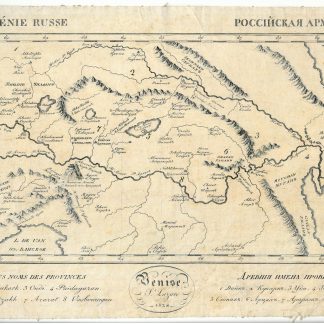