"It has been a genuine pleasure to work with you during your term of service": Letters from President Roosevelt to the first U.S. Ambassador to Mexico

Letters of appreciation from President Roosevelt to Hon. Powell Clayton, who had been appointed in 1897 as the first Ambassador of the United States to Mexico by President McKinley, when that post was elevated to an embassy post.

1) "If, as the time approaches, you think seriously of resigning your position as Ambassador, please come to no conclusion without writing me well in advance and letting me have time to communicate with you. The result in Arkansas was to my mind absolutely conclusive as showing that the voters were with the regular organization. How I wish we could get a Republican Congressman from Arkansas! [...]" (4 Oct. 1902).

2) The second letter asks Clayton to attend a meeting of the National Committee the following January - "then I should like to talk in full with you over the whole situation" (20 July 1903).

3) "Let me now thank you for having consented to stay in until the end of this term. I appreciate your having foregone your desire to return to private life [...]" (26 Oct. 1904).

Clayton resigned in May 1905. "When he retired from the Mexican embassy, [he] became a resident of Washington DC, although he maintained various business enterprises in Arkansas and continued to be a major power within the local Republican Party. He died in Washington DC on August 25, 1914, and is buried in Arlington National Cemetery" (Encyclopedia of Arkansas).

With autograph amendments and additional note of congratulations, one letter with U.S. Embassy receipt stamp on one page. Creasing, light dust-staining to rectos where folded. Correspondence from Clayton to Roosevelt from this period is held in the Roosevelt Papers at the Library of Congress. The present letters have been retained in the family until now. 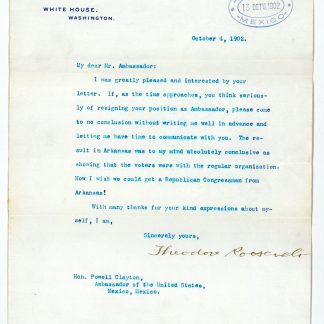