An 18th century Styrian painter's handwritten manual of recipes for gilding, silvering and the preparation of varnishes, pigments, foundations and cements, as used by painters and goldsmiths. The recipes include a plethora of varnishes (Japanese, Chinese and Indian varnish, hot, crystal, glossy, glazing, polishing, cobalt, green, black, raised, oil, gold and metal varnish); instructions for gilding, painting on glass, rectifying spirits of wine, and dissolving gum copal; and the preparation of gold foundation, "good cements" and "red Armenian bole and boles on which to smoothen glossy silver and gold". Occasionally the artist also noted the prices of material and where to obtain it: "gum copal costs 2 fl 44 kr at the salesman where the shield with the golden angel is, in the first bag".

The Graz-based painter Reich is known to have been active from 1744 (cf. Thieme/B.). He did work on an Immaculate Conception for the church in Sentilj, northern Slovenia, in 1750 (cf. Admont records) and was registered as a member of the local confraternity of painters in 1753 (cf. Wastler). The title-page dates the collection to 1741, when he probably began his career, but as evidenced by several dated entries which record when a particular varnish was made, the manual was in use as early as 1730 (cf. fols. 118r and 119r) - perhaps by Reich's teacher, as the variation in the handwriting suggests. Even later, in at least one case another painter was invited to enter a recipe of his own: a formula for white varnish on fol. 117v is signed by a Giuseppe Castelazzi and dated to 1778. The latest dated entry is a brief list of accounts from 1786 to 1788, showing that the book was maintained as an artist's manual over a period of nearly sixty years.

A century before it served as a Kunstbüchlein, the volume had been an elegant but largely empty friendship album used in 1640/41 by the Styrian nobleman Hans Georg von Kaltenhausen zu Greiffenstein during his grand tour of Italy. From this earlier lease of life the album contains a splendidly painted title showing Kaltenhausen's coat of arms, flanked by personifications of Religion and Justice, and twelve entries by Austrian noblemen, some dated to Florence and Siena. Almost all are illustrated with gouaches of the arms of the contributors, which include Siegmund Friedrich von Trauttmansdorff, Johann Wenzel Kotz von Dobrsch, Johann Sebastian Schätzl von Hörmansperg, Sigismund and Johann Schiefer von Freiling, Franz Ludwig von Hoyos, Johann Georg, Barons Karl and Johann Kaspar de Pisein, Churburg and Schwanburg, Wolfgang Sigismund Elmar von Edelbrunn, Ignaz Zoller, Thomas Eyseler, and Abram Lay. Further, the album contains two finely crafted scenes of chivalric sport: three riders running at the ring, and another (an insertion on paper) of two jousting knights in full armour, charging at each other.

Later provenance: Two 1862 pencil entries from Munich (in Italian and Czech) on fols. 66v and 67v. Subsequently acquired by the Dutch collector Jan Willem Six van Vromade (1872-1936) and sold in 1925 as part of his sale at Van Stockum's, Den Haag (lot 264), to the collector Frederik Caspar Wieder (1874-1943), curator of the Leiden University Library. Acquired in the Dutch trade. 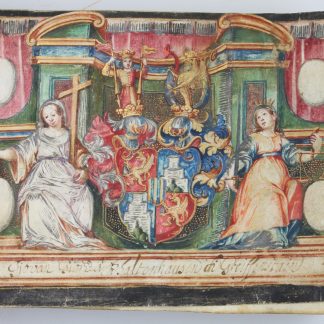