[Suppression of the Society of Jesus]. Anonymous manuscript with three anti-Jesuit texts.

The first text is a Life of the controversial Jesuit Gabriel Malagrida (1689-1761) with its satirized counterpart, written in opposing columns. Italian introductions were added in order to lend the Latin "original texts" a note of authenticity: "Short chronicle printed underneath the image of Father Malagrida, found in the case of a Jesuit father who had been robbed in Belforte. The figure is conical and Father Malagrida is represented in the habit of a Jesuit missionary with a walking stick in hand [...]". The satirized version of the introduction identifies the Jesuits as thieves and describes Malagrida in "the habit of an assassin with a deadly knife in hand". Both "vitas" follow an established formula for short biographies of deceased Jesuits. The satirical version is fiercely vitriolic, repeating common accusations against the Jesuits such as disloyalty, idolatry, and regicide. The description of the image probably refers to an actual engraved "portrait" of Malagrida. This anonymous engraving, clearly libellous, would not have been carried by a Jesuit and circulated in various copies with anti-Jesuit captions.

Gabriel Malagrida was an Italian Jesuit who worked as a missionary in Brazil for 28 years. When he returned to Portugal in 1750, Malagrida was highly respected at court. His fervour in explaining the 1755 earthquake of Lisbon as a divine punishment gave his biggest enemy at the court, prime minister Sebastião José de Carvalho, the leverage to procure Malagrida's banishment from the capital. In 1758 he was falsely accused of having been part of the conspiracy behind an attempt on the life of King José I and found guilty of high treason. This so-called Távora affair served as a pretext for the banishment of the Jesuits from Portugal in 1759. As the Inquisition found no proof of his guilt, Malagrida could not be executed for treason, and Carvalho moved on to accuse him of heresy based on falsely attributed texts. In a blatant miscarriage of justice, Gabriel Malagrida was strangled and burned in Lisbon on 21 September 1761.

The first of two sonnets completing the collection is presented as if it had been recited by a brother of King George III during the solemn unveiling of a statue of Pope Clement XIV in the house of a Catholic English Lord. Pope Clement XIV was surprisingly popular in Britain, as he did not recognize the Catholic Jacobites as pretenders to the British throne, and for his anti-Jesuit stance. A bust of the Pope by Christopher Hewetson was copied several times for members of the British nobility.

The second anonymous sonnet "against the Jesuit fathers" was supposedly "sent to Rome printed in golden characters to the ambassador of Spain and presented to the Pope by him". The sonnet describes the purported reaction of Lorenzo Ricci, the Superior General of the Jesuits, to the suppression of the Society by Pope Clement XIV. The first stave reads: "Ricci crollando l'orgogliosa testa / Chiamo fremente i suoi Compagni, e disse / Reco novella, o Figli miei funesta, / Il rio Clemente il gran decreto scrisse".

Lorenzo Ricci was arrested soon after the suppression of the Jesuits on 21 July 1773. He was indefinitely imprisoned without trial at the Castel Sant'Angelo in Rome and died there in 1775.

Some browning, creases, and minor tears. Minimal damage due to ink corrosion. 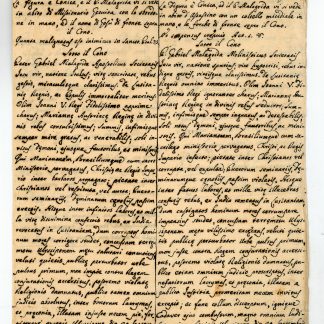 You're viewing: [Suppression of the Society of Jesus]. Anonymous manuscript with three anti-Jesuit texts.No place, ca. 1773. € 850.00
Add to cart