[Suppression of the Society of Jesus]. Anonymous manuscript with 13 predominantly anti-Jesuit poems.

4to. Italian manuscript on paper. 12 pp. on bifolia.

The first poem in the manuscript is an anonymous sonnet entitled "In occasione della Vinciza fatta al Lotto di Napoli industriosamente dalli Romani" that compares Roman politics to the "damned game" of lottery, but also a "sorbet" that needs to be swallowed, and attacks several people, including the cardinals and Curia members Luigi Maria Torregiani and Simone Buonaccorsi, as "assassins" and "perfidious ministers" who give Romans the "title of thieves".

The second anonymous poem is an anti-Jesuit sonnet, presented as a kind of prophecy that was "recovered above" a Jesuit building in Rome "nell' Arco de' Greci", probably referring to the Collegium Graecorum. It compares the Jesuits to a "flock of birds" who built their nest from loot but are now "cast out", alluding to the suppression of the Society of Jesus in 1773. The final stave openly calls for violence, even threatening those who do not participate in the extirpation: "Per estirpar la maladetta Razza / Calpesteremo il Nido, i Padri, e l'ova | E proscritto sarà chi non c'ammazza".

This is followed by a copy of Carlo Innocenzo Frugoni's (1692-1768) sonnet "L'Angelo Sterminatore", here appropriated for anti-Jesuit purposes, calling for the "expulsion of the Society" from Parma. The sonnet has been published in the second volume of Frugoni's collected poetry (C. I. Frugone, Opere poetiche II [Parma, 1779], p. 373).

Another comparison of the Jesuits with birds, now ravens, is presented in an anonymous Latin distich: "Dar Lojoliticii [...] Opes, Gusmani Corpus Alumnis: / Num Carnes Corvus, devorat Ossa Canis." According to an added explanation, the poem was written to commemorate a Neapolitan woman who died because she compromised her devotion to St Dominic with her estimation for the Jesuits and followed "their advice" concerning her inheritance.

Two further sonnets are actual works of the Jesuit poets Severio Bettinelli and Giulio Cesare Cordara, although the second sonnet is wrongly attributed to Bettinelli as well. Bettinelli's sonnet "Tuona, fulmina, e sbuffa Torregiani", apparently written after the expulsion of the Jesuits from Spain in 1767 in order to "slander diverse Cardinals" such as Luigi Maria Torregiani, is met with critical annotations, whereas Cordara's apologetical sonnet "Cadrà, se così in Ciel si trova scritto" is derided in two anti-Jesuit "responses" in the form of sonnets. These are immediately followed by a satirical sonnet that ridicules the expulsed Jesuits of Spain who "cannot find anybody who allows them to disembark", starting "Ah nave, ah nave che nel mezzo all'onde". Cordara's poem has been published in the Italian journal "La Voce della Ragione" in 1832, where it is dated to 1773.

Another sonnet is couched in the form of a dialogue between "Pasquino e Marforio" and is thus a classical Roman pasquinade. Pasquino asks Marforio whether it is true that a Dominican friar has been murdered in Martinique. Marforio confirms this, implicating a Jesuit named Scarponio who had brought the news to him through a disciple.

The final and longest poem of the collection (82 verses of 4 lines) is a "Canzonetta to the Genovese Signori who welcomed the Jesuits expulsed from Spain on Corsica". The poem is a furious denouncement of Genovese hospitality and closes with a plea for Justice, asking God to "release the brakes" and have the "evil Society completely suppressed and extinguished", followed by an "Amen". More than 2,600 Jesuits were forced to leave Spain in 1767 and take refuge in Corsica until 1768, when the island was taken over by France, which had already expelled the Jesuits from its territories in 1764. This development finally forced Pope Clement XIII grudgingly to allow the exiles to enter the Papal states. 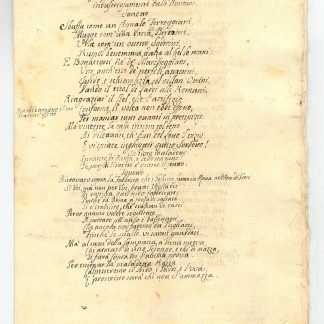