The founding of St Mary's Chapel in Hondschoote

Written only three years after Walter de Hondschoote, together with Herbert de Wulfenghem, had led the insurgent Blavotins ("Blue-feet") against Mathilde de Portugal, countess of Flanders, and the nobility. The rebels even besieged Bergues but were defeated in a battle remembered as the "lundi rouge" ("Bloody Monday") of 1206. It appears that Walter was not severely punished for his role but soon returned to grace.

Hondschoote in the département Nord lies 20 kilometres south-east of Dunkirk, on the Flanders border. It remains known for the battle of Hondschoote in 1793, when the French army defeated the Anglo-Hanoverian troops of the Duke of York.

Legibly written in a scribal hand. A central fold, minor soiling, but generally in good condition. 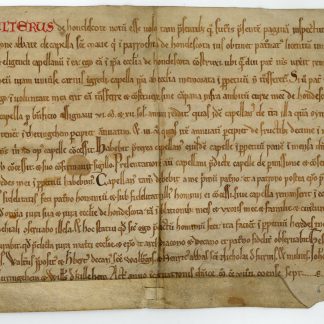