Rare incunabular edition of the "Summa Angelica", beautifully preserved in the original Flemish blind-tooled binding. Both covers are quartered by a cross ornamented with rolls of delicately interlaced rods and bands in the late Gothic style. The four quarters outside the cross are filled with impressions of the same rectangular panel (80 x 52 cm). The panel's inner rectangle is divided into two vertical stripes, each occupied by two interlacing vine branches enclosing within their curves four animals: a bear, boar, goat, and fawn facing a stag, monkey, lion, and hare. Round the margin runs an undulating leafy tendril into whose curves further hares, boars and stags are nested. Examples of this characteristic Flemish design, widespread in the early decades of the 16th century, are known in the Goldschmidt collection (no. 107, plate XLII) and in the Otto Schäfer collection (no. 26), bound ca. 1520 by Louis Bloc in Bruges and ca. 1537 Jacob Clercx de Ghele in Antwerp, respectively. Indeed, so strong is the similarity between the central animal-and-vine compartments of panels used by Bloc and the one at hand, exactly the same size and differing merely in the design of the border and in the fact that they are mirror-inverted, that it is tempting to speculate whether not one was produced as a direct copy of the other.

The principal work of the Franciscan canonist Angelo Carleti di Chivasso (1411-95), this is an alphabetically arranged dictionary of moral theology which develops, in 659 chapters, a set of rules for those desirous of leading a Christian life. First published in 1486, its subjects include a wide range of themes such as necromancy, prostitution, usury, inquisition, and alchemy. The work was widely read and aroused the wrath of Martin Luther, who judged it one of the most harmful symbols of Catholic orthodoxy - so much so that he called it "Summa Diabolica" and publicly burned a copy at Wittenberg on 10 December 1520.

Provenance: later bookplate of the Chilean diplomat, bibliophile and art collector Matías Errázuriz Ortúzar (1866-1953) to front pastedown. Extremely rare: only 12 copies in institutional libraries worldwide, none in the United States or Great Britain, that in the Staatsbibliothek Berlin lost. 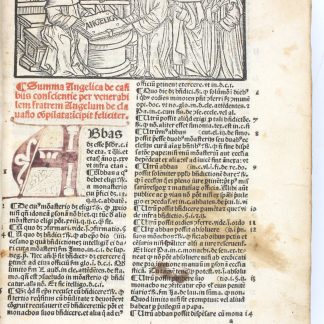