A "mnemonic" guide to the emperors, with 220 illustrated medals

Very rare sole illustrated edition of this manual of Roman and Modern history employing medallions - not antiquarian, but designed and struck by Wermuth himself - as aides-memoire to students and other interested readers. The recto of each medal is illustrated in the engraved plates (not present in earlier editions) while the text gives a basic key to each, with features numbered A, B, C, and E.

Line A describes the image of the emperor; Line B the full text on the verso of the medallion, usually a summary of his reign; Line C the inscription around the frame of the recto; and finally line E a 'motto' associated with the emperor (not included on the medal) - perhaps the most truly 'mnemonic' feature of the text. The work also begins with demonstrative but rather imaginative medals of archetypal 'Quatuor Monarchiae': Nebuchadnezzar, Cyrus, Alexander the Great, and Julius Caesar, each symbolized by one of the 'Four Beasts' of Daniel 7 on the verso.

Although by this stage under the patronage of the firmly Protestant King Frederick I of Prussia, Wermuth dedicates the present work (unlike earlier editions) to the Holy Roman Emperor Charles VI, signing his dedication "subjectissimus servus" - Charles of course being the next addition to Wermuth's lineage of rulers.

Christian Wermuth (1661-1739) was an extremely active numismatist, apparently producing as many as 1300 medals during his lifetime - many of which do not survive today due to his fondness for 'satirical' content. Friedenberg notes that he was perhaps the foremost anti-Semitic medallist of any generation. According to Forrer, "[i]n 1686 he was appointed Engraver to the Mint at Gotha and in 1688 Court Medallist to the Ducal House of Saxony (Ernestine branch); in 1699 he obtained an Imperial permission to strike medals in his own house; 1703 was appointed Court Medallist to King Frederick I of Prussia [...] His series of the Emperors is well known". 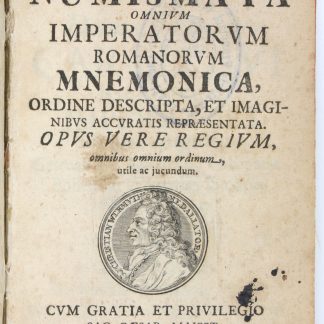